Written by Batchelder and Collins on September 8, 2022.

Bricks are some of the most common materials you see each day. They are versatile and come in many shapes, sizes, and colors. While all of these brick choices are great, it can be confusing if you are trying to decide on the right type of brick for the job you are planning.

Choosing the right brick is not only important for the aesthetic aspect of your project, but also for cost and functionality. Choosing the wrong brick for your fireplace, for example, could result in expensive damage in brick replacement as well as damage to other parts of your home.

An Introduction to Bricks: What Are Common Clay Bricks?

Bricks come in many shapes and sizes. By far, the most versatile and popular brick is the common clay brick. These brick types are made from clay or shale. They are typically used in homes and commercial buildings. They come in a range of colors, sizes, shapes, and textures.

Why Are Common Clay Bricks So Popular?

Common clay bricks are popular because of their versatility. They are also long-lasting, durable, and fireproof. Bricks are affordable and their size and weight make them convenient to use. A good bricklayer can construct a decent-sized brick wall in a day’s work.

Clay bricks can be used in many different types of common structures including homes, commercial buildings, retaining walls, and columns. You can also use them for simpler projects like constructing an outdoor grill station or making a mailbox stand.

What Materials Are in Common Clay Bricks?

For centuries, bricks have been made by mixing clay and water. These days sand is included as well as other minerals to help strengthen the brick. Once the materials are mixed, the bricks are hardened by a heat source. In the past, the bricks were sun-dried, but now we use an oven or kiln to produce very high heat resulting in a strong and durable brick.

Once the brick is ready, a mortar is used to form brick bonds that join the bricks together. The mortar helps strengthen the bond between the bricks and weatherproof them for a secure structure.

What Colors of Common Clay Bricks Can I Buy?

Brick colors are dependent on the amount of the different materials contained in the brick. Here are some of the most common clay brick colors:

When choosing the brick color that is right for your project, be sure to discuss the possibilities with a Batchelder & Collins expert.

How To Select the Right Brick for Your Project

With so many types of bricks out there in different sizes and colors, it might seem overwhelming to choose the right building material for your project. One thing you should do is understand the brick dimension and the quality of the materials in the brick.

You should also understand that not all bricks are made alike. Actually, bricks are classified according to their quality. First-class bricks are deep red, free from flaws like cracks, and have a uniform texture. Second-class bricks will have small cracks or distortions that are evident. Third-class bricks are under-burnt, soft, and light-colored. Fourth-class bricks are over-burnt and noticeably distorted in size and shape.

Another type of brick is a facing brick. While facing bricks do not have the strength of bricks used for structures, they are so named because they are meant to be used as facing so they can be seen. Typically, facing bricks are pleasing to the eye and come in different shapes, textures, and colors.

How Are Brick Dimensions Measured?

Brick dimensions are measured in depth, height, and length. As an example, the standard brick dimensions of a brick in the United States have a depth of 3 5/8 inches, a height of 2 1/4 inches, and a length of 7 5/8 inches. When measuring a brick, you have to distinguish between specified, actual, and nominal dimensions.

In addition to dimensions, bricks can be laid out in six different ways:

Most commonly, brick dimensions are based on the brick in the stretcher position. 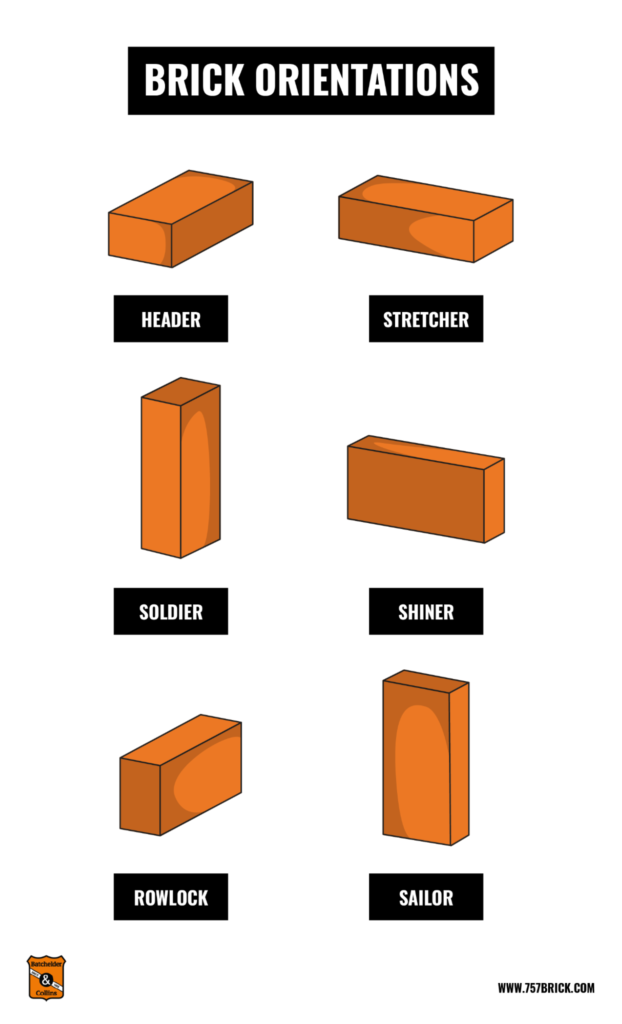 Mortar joints are the spaces between the bricks that are filled with mortar. Depending on the mortar style and width of the mortar that is used, the dimensions of the brick can change.

What Are Some Standard Brick Sizes?

Different countries have different brick sizes, so sometimes it depends on where you are located. It can also depend on the area where you buy and the manufacturer from which you buy. That being said, there are some standard sizes.

A standard modular brick measures 3 5/8 inches by 2 1/4 inches, by 7 5/8 inches. The term modular refers to bricks of a standard and predictable size whose measurements with mortar fit into multiples of four inches. This makes it easier for a builder to estimate how many bricks are needed for the job. 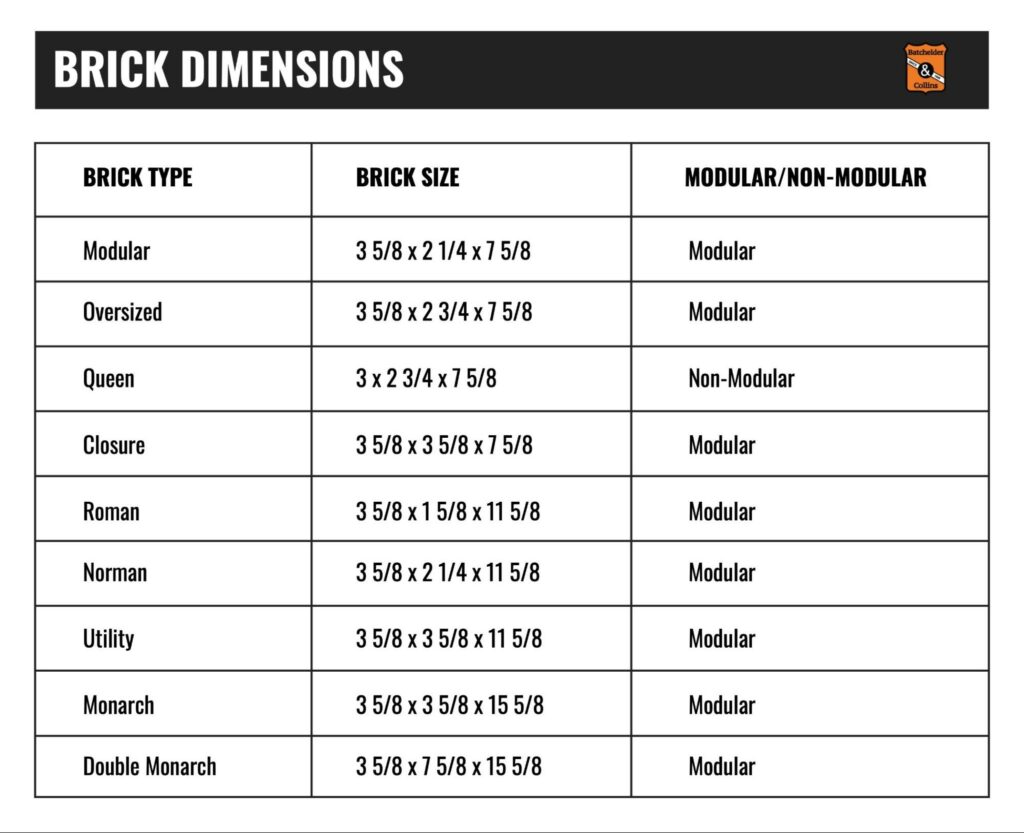 How Do I Select the Right Brick Size for My Project?

With so many different bricks and sizes, selecting the right size of brick for your project may seem overwhelming. Let’s take a closer look at some different types of bricks to help make your selection a little easier.

For most residential projects, modular bricks are the best way to go. Modular bricks offer you predictable modular brick sizes and shapes that are meant to fit together easily into a module.

Modular bricks are measured with the mortar in mind and configured to fit in multiples of four inches. This means it will be easy to fit all types of modular bricks together for any project you are considering.

Oversized bricks, also known as engineer bricks, have a higher compression strength, durability, and water absorption than other bricks. They are good for residential foundations or for commercial projects that use a high volume of bricks.

Since the bricks are oversized, they offer more area per brick. More area means less mortar and fewer joints that need to be raked.

Bigger than modular bricks, queen bricks are commonly used in commercial projects. They are non-modular and have larger square cores that allow the mortar to flow through them. Similar to an oversized brick, fewer queen bricks are needed to complete a job.

A closure brick is typically used to finish edges and corners. They have more hollow spaces so the mortar can sink into the brick.

For a more aesthetic look, you might try Roman bricks. So named because they are originally from Rome, these bricks are slender and flat, leaving an attractive finish. Their smooth appearance is pleasing to the eye, but they sacrifice little in strength.

This brick, with its name taken from the Normans you’ve read about in history books, is similar to a Roman Brick. They are slender, smooth, and pleasing to the eye. Unlike Roman bricks, Norman bricks allow mortar to flow through them.

Utility bricks are similar to but slightly larger than modular bricks. They are useful if you need to match bricks to windows or door frames.

Monarch bricks are also known as meridian bricks. They offer larger dimensions than a standard brick. They also have larger, squared-off cores giving them good durability and making them easier for masons to use.

What Are Other Types of Brick?

Common clay and concrete paving bricks are different from traditional bricks. They are solid bricks that do not contain holes. Typically they are used for porches, patios, walkways, and driveways.

Also known as pavers, they are built to last. They can withstand extreme temperatures, snow, rain, and foot traffic.

If you are building something that has to stand up to extreme heat, like a fireplace or chimney, standard bricks just will not do. You need fire bricks, also known as refractory bricks. Fire bricks are composed of a special type of clay known as fireclay. They not only have fire resistance but also can withstand heat up to 3,000 degrees Fahrenheit and are perfect for applications that require high heat tolerance.

Sometimes, a full standard brick is just too much. There are times when you simply want the right look. That is a good time for thin brick.

Thin brick, also known as brick veneer, is great for when you need a striking visual appearance for a wall or backsplash. The bricks are cut thin, so you get a great brick look without the weight.

Fulfill Your Home and Backyard Dreams with Our Quality Bricks

Batchelder & Collins has been serving the Hamptons Roads and surrounding communities since 1838. We can help you fulfill your home and backyard dreams with our quality bricks.

For all your brick and masonry needs, call us at 757-625-2506 or contact us online. Our experts are standing by to guide you in finding the right bricks for your construction projects. We will take you through the process from brick choice to completion of the project. Count on us for quality bricks that will be right for all your projects!

Batchelder and Collins
Batchelder & Collins is a proud leader in masonry, hardscapes, and natural stone veneer in Norfolk and Williamsburg, Virginia. Get in touch.
We Have Happy Customers
Contact Us
Your Hampton Roads Masonry, Hardscapes, Foundation and Veneer Distributor Since 1868!
Norfolk Location


Newsletter
Enter your email for a quarterly newsletter filled with tips on home improvement and deals from your favorite building supplier!